Honoring The Passion Of Steve Jobs 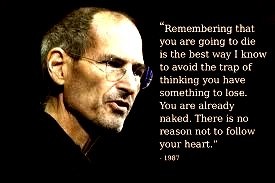 Honoring The Passion Of Steve Jobs

Did I ever meet Steve Jobs?  Not in person.  Yet he had a profound impact on my life, as he did on so many.  And his death touched me, impacted me, saddened me. On this anniversary of his death, I’m honoring that impact by sharing my thoughts.

He was a PASSIONATE man!  Probably not a perfect man, yet who is?  He lived his vision.  He was true to himself.  He didn’t compromise.  He didn’t settle.  He pushed himself and those around him to live full out, to live their greatness.

Everyone knows how he dropped out of school and started Apple in his garage.  How he was thrown out of his own company, replaced by a soft drink manager.  How he picked himself up, continued to live his vision, got his company back, and then brought it out of near bankruptcy to become (at least now) the largest company in the world.  He created, innovated, had a family and children and had interesting taste in clothes.

I remember as an undergraduate at MIT when the Apple II came out, it was this little computer you plugged into your tv.  At this point, the smallest computer I had ever seen (and most people hadn’t even seen a computer in the mid-1970s!) was about the size of a walk-in closet.  And many computers filled entire rooms and buildings!  Punchcards were still a common way of data entry.  Pretty wild.

And less then ten years later, the first Macintosh computer came out.  I remember a dear friend of mine bought one of the first ones and we just marveled at the fonts we could use and how pretty the love poems we wrote to women were (and how those pretty love poems would get us what we wanted – we WERE in our twenties, you know).

Yes, I’m a Mac-addict and the ultimate consumer for technology.  AND, what investment karma I’ve had over the years has been greatly tied in with Apple stock as well. I’m sure it will always be a part of my portfolio and I will be grateful to Steve Jobs for a chunk of my retirement funding for sure.

I was and am saddened by Steve’s death at such a young age.  He was only three years older than I.  It’s hurtful when anyone dies, yet someone who was so prolific, so impactful, so brilliant, it’s even worse.

I’m sad for him, for his family, for the world and yet it calls my life into question as well.  The question I ask myself now is, “What is MY vision, and am I living it?  Am I true to myself?”

While few, if any of us can compare our life accomplishments to Steve Jobs, I CAN hold him up as an example.  I CAN use him as a vicarious mentor and hold myself more accountable to living MY truth, MY vision, MY dream.  I can use HIS accomplishments as motivation to push myself further to create MY life more fully.

And I encourage YOU to do the same.  What is YOUR vision and are you LIVING it today?  Are YOU true to yourself today?  HOW can you express more of yourself today?

Think about  it.  Think Differently!

And if I can support you in some way, in living YOUR vision, YOUR dream, I am available for complimentary consultations by telephone to find out how I might facilitate moving through your blocks and into your growth. Click Here.