My Daughter Is Joining The Air Force & I’m An Empty Nester! 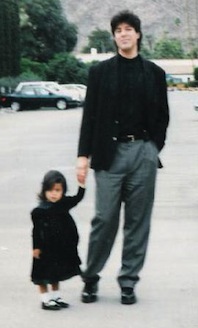 My Daughter Is Joining The Air Force & I’m An Empty Nester!

My daughter, Alana, turned eighteen earlier this month and four days later I watched her be sworn into the Air Force and get on a plane for Air Force Boot Camp in Lackland, Texas

They say it’s harder for mothers than for fathers to deal with a child leaving home and becoming an empty nester.  I’m not sure that I agree.  While my ex-wife has probably shed more tears than I have, the bond between father and daughter is a very special, very deep one.  And I’ve had my share of tears as well.

She’s my baby and always will be.  I can still remember cutting the cord on the day she was born.  Actually I remember having to cut it TWICE because the thing was so tough!  And my daughter is tough, so I’m really not worried about her being okay in Air Force Boot Camp or in the world.

She’s sweet, kind, friendly, smart, beautiful (it’s all true, not a father’s bias, I swear) and TOUGH.  It was HER decision to join the Air Force, but more about that later.  So it’s not that I’m worried about her, I have no doubt she’ll come through with flying colors and I can’t wait to attend her Boot Camp graduation and her Coin Ceremony.

It’s just that I’ll miss her.  She’s been in my life consistently for over eighteen years.  There really aren’t that many people that have been around much longer than that in my life that I’m still connected with.  Certainly no one that I love as much as I love her.

We have shared so many experiences beyond the basic walking and talking.  I remember putting her in the pool at six months and teaching her to love the water.  She’s been fearless ever since!

I was the one who danced with her at Cotillion (which I had never heard of before, but it was fun to watch her learn to dance and master the social graces).  I was the one who was so proud as she became a Bat Mitzvah (though I still think she did it for the party and the presents).

I was the one who let her drive my car for six months getting Driver’s Education credits towards her license.  I was the one who took her for her driver’s test and saw her face light up impossibly bright when she passed the test!  And then, I was the one that was stressed knowing that my daughter was sixteen and driving in Los Angeles!

I was the one wondering who this beautiful young woman was going to her High School Prom in a limo with a boy!  I was the one not understanding how I could have a child old enough to graduate from high school!

Also, I was the one doing my best to not spoil her and set limits and put up with all of her teenaged, adolescent rebellion and testing.  And testing!  And testing!!

And now SHE is the one who will be tested, as her TI (Training Instructor) in Boot Camp will definitely NOT be spoiling her or giving her an inch.  I have no doubt she’ll make it through with flying colors though. It’s all mind over matter getting through and she has a strong mind.

After Boot Camp, she already knows what her assignment will be and she will head to Tech School to learn about Geospatial Satellite Intelligence.  Pretty high tech, for someone who says she wants to become a psychologist.  Of course, I had a high tech career before I went back to school to become a psychologist, so perhaps the apple doesn’t fall that far from the tree.  And it all could change in a heartbeat!  I’ve had MANY careers and perhaps a few more to go.

So like every other parent then, my sadness isn’t about my daughter, it’s about me.  Alana is going off to do exactly what she wants to be doing.  The Air Force was her idea and her reasoning certainly made sense to me, which is why I agreed to sign the paperwork when she was seventeen.

She will have the opportunity to learn what she is made of, which most young people don’t get to do.  She will have an opportunity to learn many skills and also get her undergraduate degree while in the Air Force.  And if she chooses to stay past her six-year enlistment, the Air Force can pay for her graduate training as a psychologist.  If not, she’ll have G.I. Bill educational benefits.

And as she told me, “If you spend a lot of money on my schooling now, I’ll probably be unemployed in four years, anyway!”  She’s pretty pragmatic for an eighteen year old, I must say.  Her main reason for going was that she wanted to be independent of her mother and me.  She wanted to make her own way with her own money.  How many kids feel that way AND act upon it?  I have to be proud.

And I AM proud.  And I miss her and miss knowing what she’s doing and how I can help her.  I miss being active in her life as a father who is involved on a daily basis.

That’s over. The cord is being cut again and this time it’s MY separation anxiety I have to deal with, not Alana’s.  She’s fine.  I’m still her father, but my role is changing.  Where did the time go?  I swear it was only last month that I was in the hospital cutting the cord!

Bottom line is that her mother and I have done our jobs pretty well.  We’ve taught Alana good values and how to be independent.  She’ll always have us if she needs us for a sounding board, for counsel, for a parent’s love.  She has many wonderful gifts to share with the world and now is the time for her to take that next step towards adulthood.  I have no doubt she will shine in the world and be a bright star.

The facts are that my daughter is leaving home and joining the Air Force and I’m an empty nester.  And this is my chance to reinvent myself and redesign my life for the next phase.  And while I’m doing that,  I’ll still miss my daughter every day and love her with all of my heart.

P.S., I’d love to hear your thoughts, feelings and experiences about having a child leave home and/or join the service, please leave your comments below.