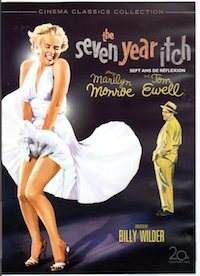 A survey of 2000 people in Great Britain seems to indicate that in addition to the many advances in technology and lifestyle in the past decades, that we’ve also “advanced” the seven year itch to only three years!

The “Seven Year Itch” is the belief made popular in the Marilyn Monroe movie of the same name which suggests that there is an inclination towards infidelity after seven years of marriage.  The UK survey indicates that partners in relationships take each other for granted after three years.

Small irritations that seemed “charming” at the beginning of the relationship became major turnoffs after three years for sixty-seven percent of those surveyed.  These included snoring, hygiene (including stray toe-nail clippings!), weight gain and too much time with the in-laws.

Fifty-two percent of couples together less than three years had sex three times/week or more while only sixteen percent did so AFTER three years together.

As a couples counselor for the last twenty years, I have to say that I’m not surprised by these findings.  From the perspective of Imago Relationship Therapy, the “Honeymoon” stage of relationship lasts from six months to two years, and then the couple enters the “Power Struggle” stage, so the survey is consistent with theory and my personal experience as a therapist.  If you’d like to learn more about the stages of relationship, please click on my article, Three Stages of Relationship.

Also, the findings of Dr. John Gottman, a well-renowned researcher on couples, predicts that couples with a ratio of five positive interactions for each negative interaction have the highest success rate for a long-term relationship.  And the survey seems to indicate that the level of compliments given in the participant relationships is well below that.  To learn more about that research, you can read my article, Have Fun In Your Relationship.

We live in a very fast-paced, accelerated time and these results indicate that our intimate relationships are accelerating as well.  The “Seven Year Itch” is now the “Three Year Glitch”.

AND, you CAN do something to improve your relationship.  That is my belief and why I created this Passion 101 website.  If I can be of service to you, please contact me and let me help provide you with the tools to reverse this situation.  You CAN bring back the passion!

Thank you so much,