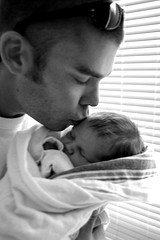 A study from Northwestern University  has provided data on an issue that has impacted couples since the beginning of procreation.  While there has been plenty of research on the changes in sexuality for new mothers, what happens to fathers has largely been ignored.  Not any longer!

I have worked with over one thousand couples over the past twenty-five years and quite a few have been new parents wanting counseling because their sex life just isn’t the same as it used to be!

However, this new study by Northwestern (click for study) gives us some insight into the perspective of the new father!

Let’s face it, no matter how “evolved” we feel as men, in part we (and society as well) define ourselves by our virility, our sexuality, our level of lust.  And being a new dad shakes us up!

We knew we were sleep deprived, we knew that our partners were as well and that they weren’t physically ready to get “back into the saddle” as quickly as we were.  However, who knew that Nature/God/Evolution/Whatever also tries to help us to accommodate them.

That, in fact, was a point that the authors of the study emphasized: a minor dip in testosterone doesn’t mean you’re less virile; rather, it seems to be nature’s way of adjusting impulses slightly — to make a man slightly less likely to stray once he has a family to look after, and more likely to focus on the tasks at hand.

So, look at the research, acknowledge it and don’t feel like less than a man if you’re not having as much sex as a new father as you used to.  Science is on your side!  And believe me, as a man in the second half of life with a 22 year old daughter, my sex life has significantly improved from those first two years after her birth and in most ways is better than ever!